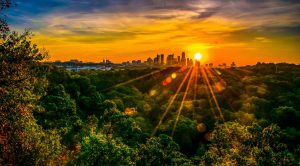 Austin, Texas is among the cities named by Moody’s Analytics for a potentially quick post-pandemic recovery, given its recent economic strength, higher educational levels, and low density.

According to the report, cities like New York, Boston, Miami, Las Vegas, and San Francisco will recover more slowly and be seen as riskier, while cities such as San Jose, Durham, Austin, Seattle, Minneapolis, Madison, Denver, Salt Lake City, Des Moines, and Omaha will have a quicker recovery.

“Some of the places that we're really looking at now would be places that have high degrees of educational attainment but are lower density,” said Moody’s Analytics Senior Regional Economist Adam Kamins. Places that “have grown very, very well over the last five or six years in particular, are pretty well positioned coming out of this whenever we do.”