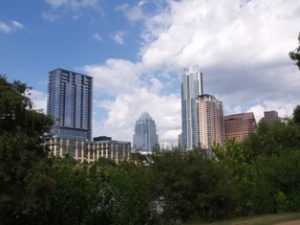 The Texas economy is continuing to outpace the United States economy, according to the Monthly Review of the Texas Economy created by the Real Estate Center at Texas A&M University. The state experienced an annual growth rate of 3.2 percent in nonagricultural jobs from December 2017 to December 2018, for a gain of 391,800 jobs. U.S. nonagricultural jobs grew at a rate of 1.8 percent. In the nongovernment sector, Texas added 388,800 jobs for an annual growth rate of 3.7 percent, while the U.S. grew at two percent. Texas unemployment in December 2018 was 3.7 percent, a decrease compared to four percent in December 2017. The U.S. unemployment rate also decreased, from 4.1 percent to 3.9 percent. The information industry is the low spot among Texas employment growth rates by industry from December 2017 to December 2018, with a decrease of 2.1 percent and a loss of 4,200 jobs. Mining and logging was by far the top sector for job growth, with a 17.97 percent increase and growth of 41,300 jobs. The highest number of added jobs was in construction, with the addition of 46,800 jobs and a growth rate of 6.4 percent that put it in the number two spot percentage-wise. Other well-performing industries by percent change were transportation, warehousing, and utilities; manufacturing; and professional and business services. All major metro areas in Texas experienced job growth from December 2017 to December 2018, except for Victoria and Beaumont-Port Arthur. Midland took the top spot, with 7.1 percent growth. Houston-The Woodlands-Sugar Land and Sherman-Denison were next with 3.6 percent growth. Dallas-Plano-Irving and Austin-Round Rock rounded out the top five with 3.5 percent growth. Of Texas cities, Midland was lowest with a 2.1 percent rate, Amarillo and Odessa were next with 2.6 percent, Austin-Round Rock was fourth with 2.7 percent, and College Station-Bryan was fifth with 2.8 percent.